WHO WILL PAY FOR MY FLORIDA CAR ACCIDENT?

Car accidents in Florida can be devastating, and if you’ve been in a crash, you’re probably not sure if you should get a lawyer. Your vehicle might be totaled. You could be in pain from a back or neck injury. You may not be able to work for weeks, months, or longer as you try to recover. You likely want to know what the average settlement for a car accident is or if you should pursue a lawsuit. Farrow & Pulice can help. 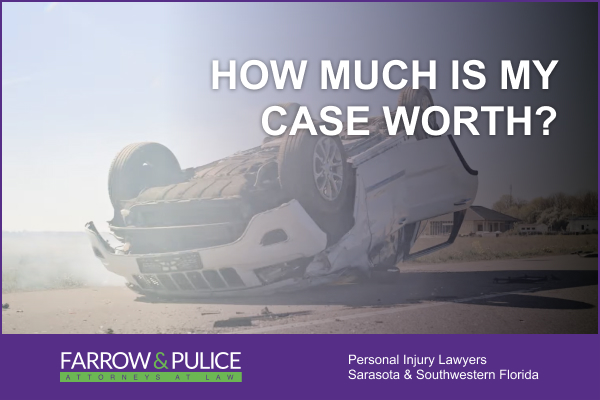 Knowing what to do after a car accident can be confusing, and if you don’t act right away you might not get the compensation you deserve. Worse yet, you could be pressured into agreeing to take a lowball offer from the car insurance company and realize later that the amount you accepted doesn’t come close to covering all your expenses. That’s why it’s important for you to contact a car accident lawyer from our Sarasota legal team who knows how the system works in Florida and who understands that car insurance companies don’t always play fair.

Florida’s insurance system is different than other neighboring states because Florida has a “no fault” car insurance system. This means you deal directly with your insurance company after your car crash, regardless of who’s at fault.

In certain circumstances you may be able take legal action against the at-fault driver, but in order to do so your injury needs to exceed Florida’s “injury threshold.” Specifically, you need to have sustained a significant, permanent injury in the crash.

For example, if you’ve suffered an injury to your back or neck ─ the most common injuries people sustain in car crashes ─ it’s important to get checked out by a doctor, even if you don’t think you’ve been seriously hurt. 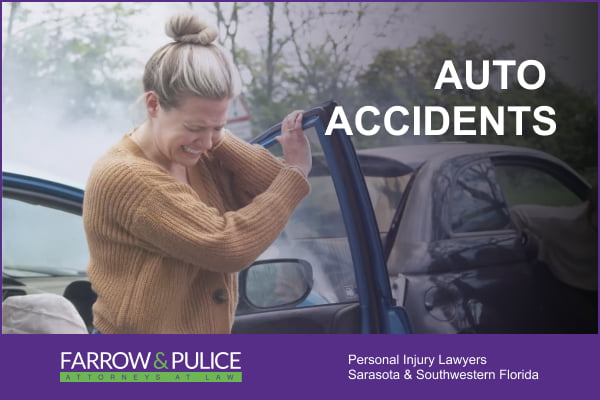 If you’re trying to get compensated for your car crash, there will likely be a lot of debate about whether your injury is permanent or significant. People often suffer back or neck injuries in a crash, and while something like whiplash may not seem like a big deal, it can have lasting effects. Farrow & Pulice can serve as your voice with insurance companies and help you prove that your injury meets Florida’s injury threshold.

Who determines the at-fault driver in Florida?

Insurance investigators are often the ones who determine the at-fault driver. The investigators base their decision on evidence ranging from eyewitness testimony to a Florida Traffic Crash Report.

What you say to police officers and insurance investigators can play a major role in deciding who caused your car crash. That’s why we always advise accident victims to keep their comments to a minimum and never admit fault or wrongdoing.

As for insurance investigators, we strongly recommend you don’t talk to them at all. Anything you say could be used as evidence to reduce or deny compensation. Knowing what to do after a car accident can dramatically change the outcome of your claim. Saying the wrong thing could ruin your chance at receiving an average settlement offer or reduce the compensation you receive from a lawsuit.

Florida requires drivers to have the following minimum amounts of car insurance:

These limits are significantly lower than other states. It’s important to note that Florida doesn’t require drivers to have collision coverage, which covers property damage to your vehicle in the event of a crash.

Some drivers choose to get extra insurance because car crashes can end up costing people a lot of money. While the average compensation from an insurance settlement or lawsuit varies from case to case due to different circumstances, many drivers feel it’s necessary to have extra coverage and protection, just in case.

Having enough insurance is important, but it’s also critical that you have an aggressive legal team on your side that can help you earn a settlement offer or win a lawsuit. Get a car accident lawyer from Farrow & Pulice to help you obtain maximum compensation.

Average compensation for a car accident in Florida

Many people don’t realize how many accident-related expenses can start to pile up after being in a car crash. Depending on what type of insurance you have and the circumstances surrounding your car accident, the average settlement or lawsuit may include compensation for:

During your lifetime, all these expenses can add up to hundreds of thousands of dollars, maybe even millions. If you’ve been involved in a crash that took place in Florida, you should contact a car accident lawyer from our Sarasota law firm as soon as possible to discuss the details of your case and explore all your options.

How long do I have to file a car accident claim in Florida?

In most cases, if you wait longer than four years to take legal action, you lose your right to pursue compensation from the at-fault driver, the at-fault driver’s insurance company, or another party. That’s why it’s important to take action right away and get a car accident lawyer in your corner who can act fast on your behalf.

Another reason why it’s critical to act fast is because evidence often disappears over time. The longer you wait, the harder it can become to find the facts you need to build a strong lawsuit. Evidence can include:

Car crashes in Florida with uninsured or underinsured drivers

Even though all drivers in Florida are required to have car insurance, that doesn’t mean they all obey the law. Imagine being in a car accident, having your vehicle totaled, and missing time from work due to a painful back or neck injury ─ only to find out the responsible driver doesn’t have car insurance. In this scenario, trying to get the compensation you deserve could be complicated, stressful, and frustrating.

The same holds true for car crashes involving drivers who don’t have enough insurance, also known as underinsured drivers. In both cases you would likely need to file a lawsuit, depending on what type of insurance you have.

If you have uninsured/underinsured motorist (UIM) coverage, you can file a claim with your own insurance company. If you don’t have UIM coverage, you should explore other legal options. A car accident lawyer from Farrow & Pulice can review your insurance policy and explain your options. Contact us for a free case evaluation.

How a car crash attorney from Farrow & Pulice can help you

Crash victims only have one opportunity to obtain compensation for their accident-related expenses. Insurance companies know this, and that’s why they often try to get a crash victim to accept a below average settlement offer soon after the accident. They know if you agree to settle right away they can save a fortune by not paying you what you’re entitled to.

Don’t let insurance companies dictate what happens to you, and don’t let them trick you into settling for less than you deserve. Get fair compensation for your crash, and put the power of Farrow & Pulice to work for you. Contact our Sarasota law legal team for a free case evaluation.