It’s critical for both pedestrians and drivers to exercise caution when around one another. When they don’t, a severe pedestrian accident can occur in Sarasota, Bradenton, Venice or anywhere else across Southwestern Florida. You could be crossing the street at a crosswalk or intersection, in a parking lot or parking garage, or even be on the sidewalk or driveway of your residential street. At Farrow & Pulice, our experienced pedestrian accident lawyers are committed to protecting the legal rights of injury victims and families who have lost loved ones in these types of car accidents. 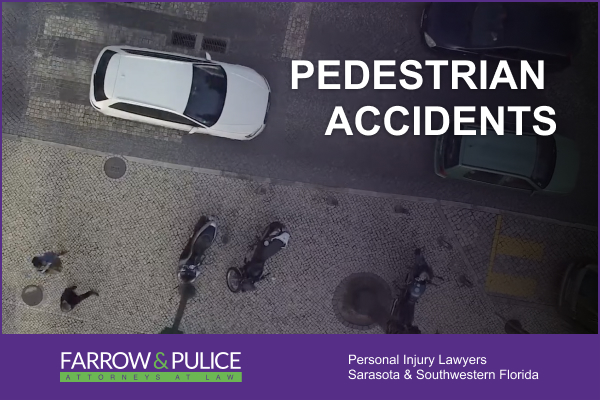 According to the National Highway Traffic Safety Administration, more than 4,000 fatal pedestrian accidents are reported each year in the United States, with thousands more people sustaining serious injuries in the process. These injuries can often be very serious, including:

When walking on a marked crosswalk or given the “walk” signal, pedestrians have the legal right to pass safely. But even if you were walking outside of a crosswalk and struck by a car, you still may have a right to pursue a claim against the driver. If partially at fault for a Florida pedestrian accident, the state’s contributory negligence law allows you to pursue compensation for your injuries. If a pedestrian is walking outside the boundaries of a marked walkway or when a “don’t walk” sign is displayed and is hit by a driver, he or she may be found partially at fault for the accident.

At Farrow & Pulice, we understand that serious pedestrian accidents require serious legal representation. We know how to find the evidence victims need to build a successful legal strategy. We know how to research each potential case. We know how to ask the right questions. We have experience dealing with insurance companies. We have access to top medical experts and accident reconstructionists. Contact us today at 866-408-1220 for a free evaluation.

Do I need to hire an attorney after my pedestrian accident in Florida?

While you don’t have to work with a lawyer, you will discover there are numerous benefits to retaining legal counsel after a pedestrian accident. People who work without an attorney on a claim often end up with significantly less money to pay for their losses than those who have legal representation. Pedestrian accidents often involve serious injuries or fatalities. The physical, emotional and financial impact can last years. However, insurance companies typically will try to minimize the amount of compensation they pay to victims. They might try to take advantage of an accident victim who is not familiar with the process. At Farrow & Pulice, we are dedicated to helping injury victims recover the compensation they deserve after an accident.

What types of damages can I collect after a Florida pedestrian accident?

The term “damages” refers to the compensation available to injury victims after they’ve been in an accident. Although no two accidents are the same, damages might include medical expenses and cost of future medical care, lost wages and loss of future earning capacity, and damages for pain, suffering and emotional distress. In rare cases, injury victims may be entitled to punitive damages designed to punish drivers who act with gross negligence or malicious intent. Punitive damages, for example, might be awarded in a drunk driving pedestrian accident.

What if I was partially at fault for my pedestrian accident?

Under Florida law, injured pedestrians have the legal right to bring a claim against a driver even when ruled to be partially at fault for an accident. But all too often, the insurance company for the driver who hit you typically wants to minimize its client’s liability. A claims adjuster may try to point the finger at the injured pedestrian and say the driver did nothing wrong. Contact Farrow & Pulice before admitting fault or accepting a settlement offer.

How much does a Florida pedestrian accident lawyer cost?

You don’t have to pay us until we win your case. That’s because we work on a contingency fee basis. At Farrow & Pulice, we believe injured pedestrians have a right to access the state’s courts without fear of how much an attorney will cost. The physical, emotional and financial impact of an accident is enough to deal with. You shouldn’t have to worry about whether you can afford an experienced lawyer. From the time you contact us for a free case consultation until a favorable verdict or settlement is reached on your behalf, you owe us nothing.

Bicycling is an increasingly popular method of transportation in Sarasota, Venice, Port Charlotte and throughout Florida. But as the number of bicycle enthusiasts sharing the road with cars, trucks and other large vehicles grows, so does the risk of a serious bicycle accident. Bicyclists might be more likely to be hit by a car than motorcyclists or pedestrians due to a bicycle’s versatility as a means of transportation.

At Farrow & Pulice, our experienced legal team understands that bicycle accidents are commonly caused when a driver fails to see the bicyclist or observe the right away. Drivers might be texting while driving, talking on a cellphone, under the influence of alcohol, or driving recklessly at high speeds moments before a crash. In some cases, the driver simply doesn’t look or fails to use his or her turn signals, sideswiping a bicycle rider when turning down a street or changing lanes.

Bicycle accidents are rarely minor. Injuries sustained by bicyclists are often severe and can take months or years to recover from. Because bicycles offer little protection and drivers who hit bicyclists can cause them to be thrown through the air, it’s not uncommon to see bicycle riders suffer from traumatic brain injuries or spinal cord injuries. Internal injuries and broken bones are also common.

In the state of Florida, a bicycle is a legal road vehicle, and riders have the same rights and responsibilities as drivers. They must obey traffic laws, stop at red lights, and use turn signals. Failure to do so could lead to a traffic violation ticket. Conversely, it’s the legal responsibility of drivers behind the wheel of cars and trucks to respect a bike rider as they would any other rider on the road.

Florida is one of the most dangerous states for cyclists. It is one of six states that made up 54 percent of all cycling traffic deaths from 2010 to 2012, according to a report by the Governors Highway Safety Association. In Florida, 329 cyclists were killed in collisions with motor vehicles between 2010 and 2012, the report states.

Protecting the Rights of Injured Pedestrians And Bicyclists in Florida

It’s time to hold careless drivers accountable for their reckless behavior. The experienced legal team at Farrow & Pulice is ready to stand up for you. Call us today at 866-408-1220 or contact our firm online to schedule your free initial consultation. Our law firm has offices in Sarasota, Bradenton, Venice, Englewood, Lakewood Ranch and Port Charlotte that are centrally located to major hospitals for your convenience.