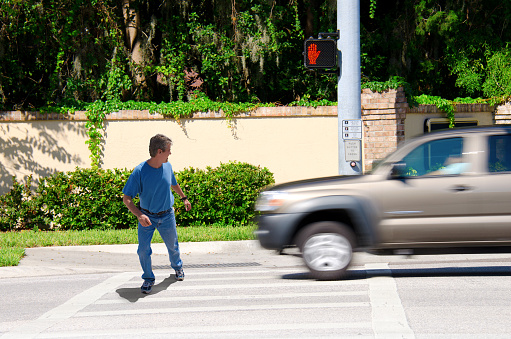 The greater Sarasota area is the fourth most dangerous for walkers in the United States, according to a recent study. The metropolitan North Port-Sarasota-Bradenton section suffered 194 pedestrian deaths from 2008-2017, according to the nonprofit Smart Growth America.

The study found Florida the most dangerous state for pedestrians with 5,433 fatalities in the 10-year period. California actually had 7,127 pedestrian deaths in the period. Florida topped the country with 2.73 pedestrian deaths per 100,000 people. That’s compared to California’s rate of 1.84.

How many pedestrians die in the Sarasota area?

In just the first six months of 2019, there were 163 crashes involving pedestrians in Sarasota and Manatee counties in Florida, according to ABC7. In the last five years alone, Sarasota Police said 18 pedestrians have been hit by cars on the stretch of U.S. 301 between Fruitville and 10th Street, an area known for people running across the street.

The situation is not improving. Urban sprawl continues to rule street design. Roads cater to the movement of car, not people, according to the Miami Herald. Federal and state policies, standards and funding mechanisms produce roads that prioritize high speeds for cars over the safety of all people.

Overall, the Smart Growth America study found that between 2008-2017, drivers struck and killed 49,340 people walking on U.S. streets. That’s over 13 people killed per day — or one pedestrian killed every hour and 46 minutes.

“This report shows that our streets are not getting safer for everyone,” the study said. The study concluded that the following groups all bear a higher share of harm:

“Our federal government needs to take the lead on prioritizing safer streets. Federal dollars and policies helped create these unsafe streets in the first place,” the study said.

What can be done to protect pedestrians?

From the study and the news stories, here are suggestions to improve safety for pedestrians:

Contact Farrow & Pulice Attorneys At Law in Sarasota today for legal help if you were injured in a pedestrian accident.