Reduced Highway Enforcement Could Put Drivers on I-75 at Risk 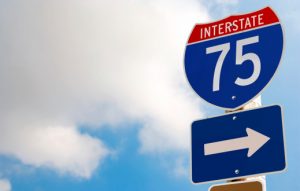 If you’ve ever traveled on Interstate 75 and feared for your safety, you’re not alone. Speeding is commonplace on I-75 in greater Sarasota and on many other highways across the Sunshine State.

ABC7 reports that speeding is a common problem on I-75 and attributes it to a lack of adequate state trooper staffing. The Florida Highway Patrol is currently short 180 troopers across the state of Florida. The Suncoast – which runs along the Gulf – is down 33 troopers.

State troopers struggle to keep up

One of the leading factors in the dwindling number of troopers, according to ABC7, is low pay – with a starting salary of around $40,000. In addition, the job is dangerous, troopers are required to work holidays and weekends, and recruiting is often difficult. The shortage leaves some troopers working up to 16 hours every shift

William Smith, President of The Florida Highway Patrol Chapter of the Florida Police Benevolent Association, discussed the importance of having enough troopers on the road.

"You've got to have enough personnel so that you have proactive enforcement or enforcement on the roadways where maybe speed is a problem, or DUIs are a problem in certain parts of the evening or on the weekends," Smith said.

In order to find out how fast drivers traveled on I-75, ABC7 took matters into their own hands. Equipped with radar guns, reporters stationed themselves by the Proctor Road overpass where they clocked cars traveling as fast as 81 mph. The speed limit on that stretch of highway is 70 mph.

To mitigate the risk of causing traffic accidents, state troopers are urging drivers to slow down and drive defensively. Speeding not only gives drivers less time to react in the event of a crash, it increases the severity of a crash. In one incident, a motorcyclist was struck by four different vehicles after he lost control of his bike. He died at the scene of the crash. In this case, the drivers couldn’t stop in time to prevent hitting him.

I-75 often gets jammed up with bumper-to-bumper traffic. All it takes is one wrong move to cause a catastrophe. In another incident, a multi-vehicle crash on I-75 in Manatee County resulted in two people being seriously injured and airlifted to a nearby hospital.

Incidents like this affect responsible motorists in greater Sarasota far too often. Crash victims suffer debilitating injuries because of someone else’s reckless behavior. At worst, those injuries become fatal.

That’s why if you or a loved one sustained injuries in an auto accident caused by a speeding driver, your rights should be upheld. Contact Farrow & Pulice, P.A., located in Sarasota, today to get started on your claim. We’re dedicated to helping injured motorists and their families seek the justice they deserve.