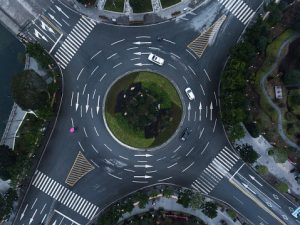 The Florida Department of Transportation has announced plans for new roundabouts on State Route 64.

ABC7 reports FDOT has determined the roundabout designs to be safer than traditional intersections. The agency is going ahead with plans for roundabouts at three intersections on Route 64 after opening several in Sarasota. The new roundabouts will be installed along SR 64 at Rye Road, Lorraine Road and Greyhawk Boulevard. Before installing a temporary traffic light at the Rye Road intersection, FDOT reported traffic accidents occurring once or twice a week at that location.

The Sarasota injury lawyers at our firm continue to follow the debate on the merits of roundabouts. These roundabouts turn an intersection into a circle, which minimizes the risk of head-on and T-bone collisions. The design also aims to reduce pedestrian accidents, as traffic comes at pedestrians from only one direction, rather than three as is the case with a traditional crosswalk intersection.

Roundabouts have been commonplace in Europe for decades (France had more than 30,000 roundabout intersections as of 2008). They have been credited with reducing vehicle collisions by 39 percent, and serious injuries and fatalities by 90 percent.

However, there remains some question about how effective they will be in the United States. Particularly among South Florida’s aging motorists and pedestrians, roundabouts can cause significant confusion and drastically reduce a driver or pedestrian’s field of vision.

Intersection Traffic Accidents a Risk for Motorists and Pedestrians

While roundabouts are an admirable effort aimed at improving road safety, careful attention will have to be paid at these locations to determine safety and effectiveness of the redesign.

Clearly something has to be done. Florida is struggling with record numbers of fatal traffic accidents and reports among the highest rates of bicyclist and pedestrian deaths in the nation. Poor road designs are a primary cause.

T-bone and head-on traffic collisions are consistently among the deadliest crashes. The effectiveness of roundabouts in reducing these types of collisions is compelling when it comes to improving traffic safety, as is the promised impact on bicycle and pedestrian safety.

Florida’s fast-growing cities have paid too little attention to safe-traffic design for far too long.  That being said, improvements to the design of our roadways will only go so far. Both in roundabouts and at traditional intersections, motorists need to pay attention and practice defensive driving to avoid causing potentially fatal collisions.

In the event of a crash, it’s best to speak to an experienced car accident attorney at Farrow & Pulice, P.A. and find out how we can help you.