Sarasota Attorneys: Safest Place in Car No Longer the Back Seat 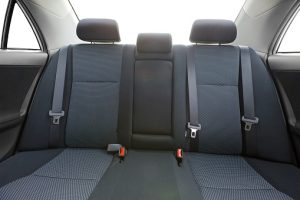 If you are in a front-end car accident, you probably think riding in the rear seat is safest – farther away from the impact and less likely to result in injuries or death.

You would be wrong.

Car manufacturers have made huge gains in protecting front-seat occupants, according to an Insurance Institute for Highway Safety study, but not passengers in the back seat. In fact, according to the institute, you are more likely to survive a front-end crash if you are riding in the front seat.

“It’s not that the rear seat has become less safe, it’s that the front seat has become more safe over time,” IIHS President David Harkey said. “We hope a new evaluation will spur similar progress in the back seat.”

Up front about safety, but not in the back

Among the technologies protecting front-seat occupants:

If you are riding in the rear seat, however, IIHS found seat belts can actually cause injuries and fatalities. The study covered 117 front-end crashes in which rear-seat occupants ages 6 or older were killed, even though they were wearing seat belts. The organization concluded improved vehicle design and better safety equipment could have prevented a majority of the deaths. For example, rear seat belts are unlikely to employ pre-tensioners or force limiters to protect occupants.

“The fact that our sample had mostly survivable crashes tells us that we need to do a better job restraining adults and older children in the back seat,” said IIHS Senior Research Engineer Jessica Jermakian.

Protect yourself by hiring an expert advocate

If you’ve been injured in a crash – whether riding in the front or back seat – your life has been turned upside down. You may be out of work, facing a long period of physical rehabilitation and tremendous financial pressure because you are unable to pay your bills and support your family.

At worst, your family has suffered the tragic loss of a loved one, perhaps a child. The emotional and mental pressures may seem unbearable as you deal with the legal system, the person denying responsibility for your accident and an insurance company whose only interest is paying you as little as possible.

The Florida car accident attorneys at Farrow & Pulice, based in Sarasota, are dedicated to handling complex cases like yours. We understand the chaos your life has become, and know how to put the lives of yourself and your family back on track. We will investigate your accident and deal with the other driver’s insurance company while you focus on what’s truly important – healing. Contact us today for a free case consultation.